Let's get started with Pandas! In case you are not aware of who, or what, pandas is, pandas is an open source, BSD-licensed library providing high-performance, easy-to-use data structures and data analysis tools for the Python programming language.

The two primary data structures in pandas are the Series and the DataFrame. The simplest way to visualise these two structures is to use an analogy with your favourite Spreadsheet application. Think of a pandas Series as Column A of Sheet 1 of your spreadsheet. Looking at the screen grab below it has 1 dimension (Column A) that represents the Series values, plus the row numbers which represent the indexes. A Dataframe is the whole spreadsheet, 2 dimensions or multiple columns, but more of that later.

This is what a Series looks like in a Spreadsheet. 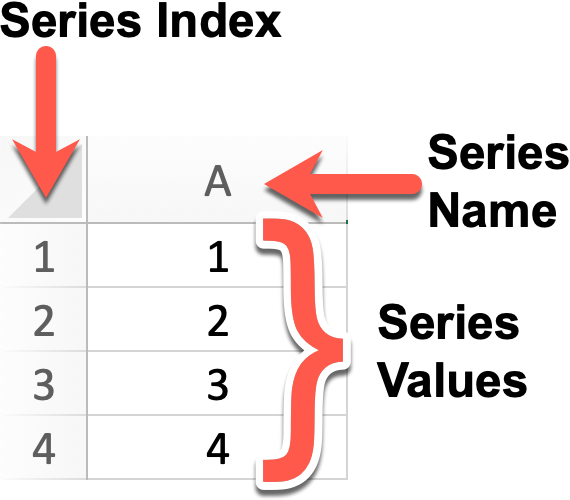 This is what a similar Series looks like in pandas:

Now that you know everything that you need to know about pandas Series it's time for you to start creating some series of your own. In this Bite you are asked to complete a number of functions that each create a pandas Series. How you create each series is up to you but if you do your research you'll find that Series can be created from all different type of Python Objects:

In the the next Bite we'll look at getting the values out of the Series in a useful manner.